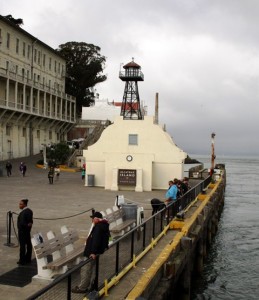 On a rainy Sunday in late March, the dark morning rain clouds were breaking to reveal a beautiful day unfolding on the Bay as we sailed to San Francisco on the Larkspur Ferry “Sonoma”. The plan was to meet up with a number of friends on Alcatraz Island to see @Large Ai Weiwei on Alcatraz. The exhibition was organized by the For-Site Foundation and includes seven major art installations on the infamous island. Ai, a Chinese artist-activist and outspoken critic of cultural and political ideologies, conceptually created a provocative experience, with the help of many individuals that, according to the brochure, “. . . turns Alcatraz into a space for dialogue about how we define liberty and justice, individual rights and personal responsibilities.”

At the head of the Dragon, With Wind. 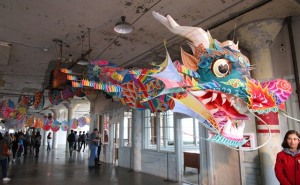 Three of us arrived by two ferry boats and a long walk down the Embarcadero. By the end of the day we tallied 10 to 12 friends that we encountered on the Rock, including one who literally “missed the boat” but stayed in virtual touch with us through texting and shared cellphone photos. We began our tour at the New Industries Building, which I would recommend, as it brings you immediately face to face with the head of the dragon. This large version of a traditional Chinese kite is the central component of the installation With Wind. Suspended from the ceiling, the stunning piece is colorful, dramatic, and friendly in a dragon-ish way. This is also where the dichotomies and layers of meaning and context begin. After we posed for our smiley tourist photos by the head of the dragon, the chill and depth of Ai’s intention and messages began revealing themselves. Beyond the gorgeous head the body of the dragon weaves among the pillars of a long, stark and dreary interior space—it hooks you and draws you in.

The individual segments that make up the dragon’s body carry quotations from activists who have been imprisoned or exiled, including Nelson Mandela, Edward Snowden, and Ai himself. The barren space, with peeling paint and broken fixtures is also festooned with smaller kites in various bird and floral shapes. These are symbols for nations that are known for violating human rights and civil liberties.

At the tail-end of the colorful dragon we entered an adjacent long room through a rusty doorway set in a wall with a grid of small broken windows. Here, displayed on the floor like a vast array of rugs, is Trace. The entire piece is constructed from thousands of small colorful LEGO blocks that visually connect the many individual stories into a unified matrix. The piece and its cleaver use of connecting units conveys one bold message about the more than 175 people, who like the artist, are not free to go or say as they wish. At the back of the room a large sign—seemingly set aside to be out of the way—declares “United States Penitentiary” and reminds us of where we are.

After stepping outside we re-entered the same building through small side door and climbed the steep steps of the gun gallery to view Refraction. The long and very narrow gun gallery overlooks the rooms below where Refraction is installed. Based on the anatomy of a bird’s wing, the vast structure appears to be trapped in a dungeon. The ‘feathers’ are constructed from metal panels typically used as reflectors on solar cookers in Tibet, and embellished here 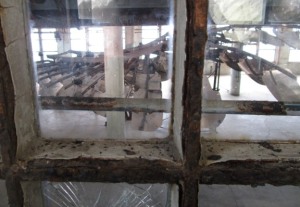 and there with tea kettles. These are items of domestic use and represent a desire for calm and normalcy in a country that is still struggling under Chinese rule. The piece is amazing in itself, but the attempt to view it was an even more powerful and disconcerting experience. The gun gallery was used by guards to control the prisoners in the area below. To get a glimpse of this huge wing in captivity was not easy. As I craned to catch a view through small bullet-shattered glass windows, I began to feel trapped and agitated. Layers of inferences and thoughts poured through me along with a visceral feeling of confinement that kept increasing—I realized I was now part of the piece.

Outside, the sun now sparkled on the water as we walked to the Cellhouse Hospital where several more pieces are installed. Inside we paused at Illumination, an audio piece set in two psychiatric observation rooms. The sounds of Tibetan and Native American chanting can be heard independently in each room but merge when standing outside. This blending of voices draws connections between China and the United States in their repression and subjugation of native cultures. 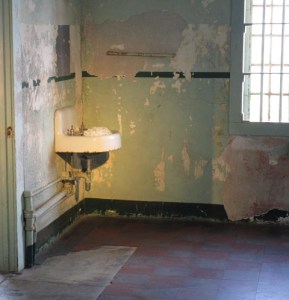 Further down the hall, in several other cells and medical rooms, you can peer through bars to see fixtures, such as sinks, tubs and toilets, filled with small handmade porcelain flowers. These are all part of Blossom, an installation that embodies reprieve and hope. The basins with blossoms glow warmly in the otherwise bleak and dim small rooms, and speak of the fragile “goodness” that dwells within all human beings, whether prisoners, guards, or visitors.

Deeper in the Cellhouse, located in A Block, is Stay Tuned—a sound installation set within individual cells. With doors ajar, a single tall metal stool invites visitors to have a seat and hear music, poetry and spoken words of people who have been incarcerated for expressing their beliefs. The words and singing contrast vividly to the implied isolation of the prison cells.

It’s an interesting ride, and well worth the effort, that becomes a thought-provoking and emotional journey—where you have the opportunity to consider the contrasts, dichotomies, layers of meanings and contexts that you encounter. It’s also important to note that the project was conceptualized and orchestrated by a person who has never set foot on the Rock, and who is imprisoned in his own country for his beliefs and activism.

Exhibition continues through April 26, 2015.
For more information about the project and individual pieces go to www.for-site.org