The amazing thing about experiencing locations with deep or powerful histories is realizing that you are also there in the present living, breathing moment. While you contemplate the stories of the past you notice their influence is still very present, but the real-time ambiance can make its own impact on the experience. Linda Connor captures these time-layered moments in large-format photographs taken in historic locations in near and distant lands.

The current exhibition in the Gatehouse Gallery at di Rosa, in Napa, is titled From Two Worlds and consists of over 30 photographs by Bay Area photographer, Linda Conner. The exhibition is presented in two segments, each telling its own story. The first part is called Dark Forces and reflects Connor’s experiences while visiting and photographing monasteries in Tibet and Northern India. In her photographs the images of sacred deities and fierce guardian figures retain their force and mystery even through the ravages of time and desecration that occurred during the Cultural Revolution. Many of the black and white photographs, such as Banner, Hemis Monastery, Ladakh, India, 2003, are printed on silk and displayed in the manner of Tibetan thangka paintings, bringing together historic traditions and contemporary contexts. Connor often uses closely cropped images which omit distractions and provide a more intimate experience for the viewer. For example, in Library of Prayer Books, Ladakh, India, 2007, the neatly folded tomes are tucked into their ancient cubbies, yet appear ready for the next monk to peruse. For Conner, the work is a celebration of the unknown, where ancient ritual and imagery still evoke a visceral experience, transcending time as well as contemporary politics. 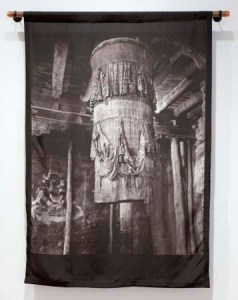 The second part of the exhibition is called The Olson House. The house, which is located in coastal Maine, was brought to notoriety by the artist, Andrew Wyeth, who painted there often for over thirty years. The Cincinnati Art Museum commissioned Conner to photograph the site in 2006 and included her images as part of an exhibition of Wyeth’s watercolors and drawings of the house and its owners. One of Wyeth’s most famous paintings from the 1940s is called Christina’s World, and portrays the physically challenged Christina Olson slowly making her way up a hill to the Olson house. Conner’s images of the setting, the house, and the interior spaces are devoid of human presence yet make reference to the people who lived and visited there. In East Side–After Walker Evans, she positions the house straight on and close-up, as for a portrait, highlighting the architectural details and symmetry that is wonderfully off-set by one darkened window. Having been strongly influence by Evans, this image pays homage to his many farm house photographs from the 1930s. While Connor puts emphases on the historic details, her photographs are enlivened through the way she captures passing light in the present moment, which animates the silent objects with a contemporary freshness. This is illustrated so well in Morning Light, where the morning sunlight dances across the framed window, bringing our attention to the collection of objects on the window sill and the peeling surface of the old wall.

The East Side — After Walker Evans. 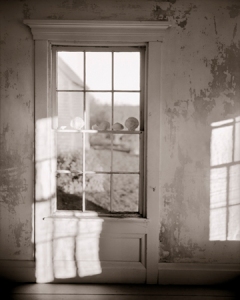 Though the two segments of the exhibition represent two very different Worlds, the similarity lies in the contrast of what happens when deep history is re-contextualized from the perspective of present time. Linda Connor is a professor at the San Francisco Art Institute and the recipient of a Guggenheim fellowship and three grants from the National Endowment for the Arts. The exhibition continues through June 30, 2013. For more information check their website, dirosaart.org.